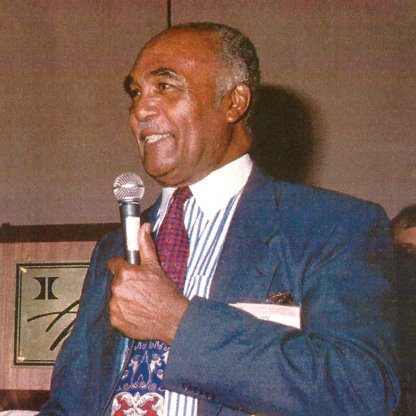 Elmer “Ace” Godwin was born July 10, 1920 in Smithfield, Va. He was educated in a one-room schoolhouse, called the Godwin School, which was built and supported by his family. Looking for a life other than working on the family farm, Godwin moved after high school to Sea Bright, NJ. There, he worked in various jobs, including building many of the jetties along the oceanfront.

World War II marked the beginning of many firsts for Godwin in his breaking of society’s racial barriers. He was a member of the famed Tuskegee Airmen, the all black 332nd Fighter Squadron who became the country’s first black military airmen during segregation. While battling racism at home, the Tuskegee Airmen never lost a single bomber to enemy fire in more than 200 combat missions – a record. Their achievements were fundamental to integrating the U.S. military. Stationed in Italy from 1943-1945, Godwin was a tower operator in charge of instructing pilots during takeoffs and landings. While there, he received the Good Conduct Medal and the Distinguished Unit Badge.

In September 2007, Godwin was awarded the Congressional Gold Medal, the nation’s highest civilian honor, for his World War II service during a ceremony at the NJ Borough of Shrewsbury’s City Hall. On Jan. 20, 2009, he was among 150 Tuskegee Airmen who were guests of President Barack Obama at his inauguration.

After the military, Godwin attended Monmouth College and Rutgers University, where he received his B.S. degree. Godwin then worked for 35 years as an electronics engineer for the Army’s Electronics Command Research and Development Laboratories at Fort Monmouth in Eatontown, NJ. He was considered a leading international lecturer and authority on wire and cable engineering.

After retiring from the fort in 1979, Godwin became CEO and Director of the International Wire and Cable Symposium (IWCS). This group brought together government and industry representatives from around the world to develop wires and cables in military applications. Godwin was also owner of GEF Associates of Shrewsbury, NJ, an electronics engineering consulting firm. In 2002, IWCS endowed a scholarship in Godwin’s name at Rutgers University. The Elmer “Ace” Godwin scholarship is for qualified high school seniors and college students in need who want to enter the electronic or engineering field of telecommunication.

Contributions to the Elmer “Ace” Godwin scholarship can be made at give.rutgers.edu/Godwin.